Having gotten our hands on the first DJI M30T in Australia for a road test, we were eager to get it up in the air for a real-world job and to see how it compares with the M300. Here’s our DJI M30T VS M300 real-world comparison.

Make sure to go and check out “Hands-on impressions” video we shot at the D1 store. It is the first video in the two-part series that we did on the DJI M30.

Ok, time to get into our review of the real-world usage of the M30T, and who better to tell you about it than our technical director Nik who took it out on two jobs, inspecting HV towers and Telco LOS.

We’re going to mention a few points that we think are relevant to anyone interested in looking to get the M30T over the M300. The thing that I’m most excited about is how much DJI has managed to pack into this drone.

I wouldn’t call it an M300 lite, it’s a powerful drone, the DJI M30T is definitely a beast of a drone, even though it is less than half the size of the Matrice M300. 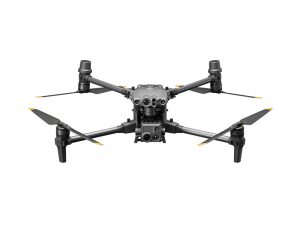 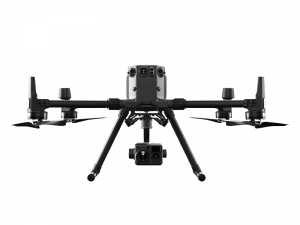 Another tick for the M30T is when the job is finished you can just fold it down, pack it up, and slot it into one of your drawers, backpack or Hardcase and you’re off to the next location.

Where as the M300, you need to assemble the legs & camera before you start a job. You also may need to set up the RTK as well if you need to use that.

Usually takes us just under 6 minutes for the M300. And depending on where you’re going location wise, you might need to disassemble as you can’t just keep it in the vehicle on the back shelf, especially if you‘re 4WD driving and going into some locations where there’s a lot of bouncing around. Especially the camera you want to make sure that’s safe and secure!

Now the camera capabilities. The new Matrice M30 series doesn’t really have a camera name because it’s attached to the drone. It’s just the M30T. There’s also an M30 version. On the M300 we have the H20T.

Is the Zoom capabilities different?

So that would mean that there’s slightly less range on the M30T but they both have that 200x digital zoom. From our experience and what we found out in the field, both at 200x zoom, they both have clear images relatively clear images.

But the M300, we think, did outperform the M30T. There was one part of the LOS operation where we were struggling to find the beacon at the other end with the M30T and we set the M300 up and it was a lot easier to see. With the M30T there were some flashes in the image or lights and we didn’t know what they were, which made it difficult to see.

We got the M300 up right after that flight and found the beacon straight away. We weren’t getting those little flickering lights in the background, which we was getting into the M30T. 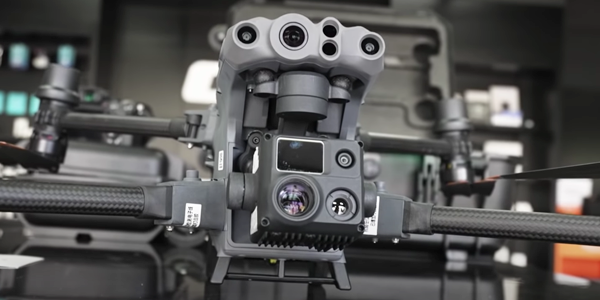 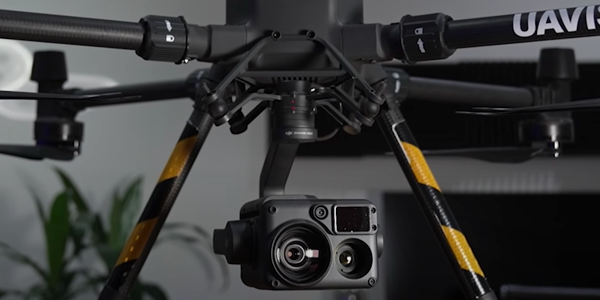 Visually they look the same. We couldn’t notice any difference. Although we did find that on the M30T you can have a split screen side by side image, thermal and visual. The M300 has a split screen as well.

Surprisingly with the rangefinder, we think it works better on the M30T. We were actually getting ranges at 1200metres and it was giving us that distance on the screen, which is what it is rated to.

With our experience with the M300 most of the time any distance past 600metres doesn’t show up and it says its too far.

The lazer rangefinder gives you the position of what it’s pointing at. So if you are doing search and rescue and you’re pointing at a person that you’ve located that information, the laser rangefinder is a GPS coordinate that is provided on the screen.

Onto Active track, we were super impressed with the M30T. We were watching it track the cars go behind buildings and trees and predicting where it was going to go and then continuing on and locking on, it was super impressive. It’s not something that we would use on our day to day work, but first responders, police would definitely!

So how does the battery life between the M30T and the M300 fair? Although we haven’t had them both side by side in the air. We were flying the M30T on quite a windy day and got half an hour flight time and that was down to 22% battery. DJI says around 41 minutes and compared to the M300, which is around 51minutes. Although you never rely on these numbers that are given from DJI as they are usually tested in a very optimal environment.

But we would still say that 30 minutes for any operation is pretty impressive & usually more than enough.

Continuing on with the batteries. Let’s talk about hot swapping. We found that hot swapping on the M30T is super easy. Having separate release clips on the back makes it so much easier knowing that you’re not going to replace a second battery by mistake, which has happened to us  several times in the past with the M300. You’ve taken one battery out and the second one’s slightly coming out and the drone just turns off.

With the M300 you’re just usually inserting the batteries but there’s no noticeable click or anything that can signify that it’s all the way in before you lock them back.

Whereas having a visual indication and also sound of the satisfying click in of the M30T is very reassuring. We have heard of cases where people are pushing the infinity battery in too far and have caused cracks in their frames on the M300.

So from a design perspective, DJI really upped their game in that department.

SO WHAT DRONE IS BETTER FOR WHAT JOB?

For powerlines and inspections, we would go for the M30 just because it’s easier to set up & a cheaper price point. If you’re using the thermal, the visual and the camera is more than capable. With power & energy clients you’ve got clearances that are quite strict. We have to keep a distance from the tower, and even at ten meters away, the powerful zoom on the M30T is more than enough to carry out a thorough inspection.

For telco work, It’s a bit of a balancing act. We think the M300 still did a bit better because of that more powerful zoom. You want that confidence that you are going to see a tower that is 40, 50, or 60 kilometers away. But then again, if you know that your job is going to be 10km or less, taking the M30T is going to be a lot easier. Just being able to transport the smaller M30T is a positive and there is also a backpack that’s coming out with the M30, so taking it on your back instead of having to lug around a big case, that will be easier for smaller jobs.

From a controls perspective or the operating system, the M30T is operating off the Pilot 2 app. However, all of the functionality between the DJI enterprise group sort of remains the same. So, you can customise your timestamps, you can create customised folders. So all that operational quality of life is still there in the M30 because it’s using basically the same system.

The other thing to mention is that because the M30 is such a small drone, the clearance from the ground does seem a little bit small when comparing it to the larger M300. 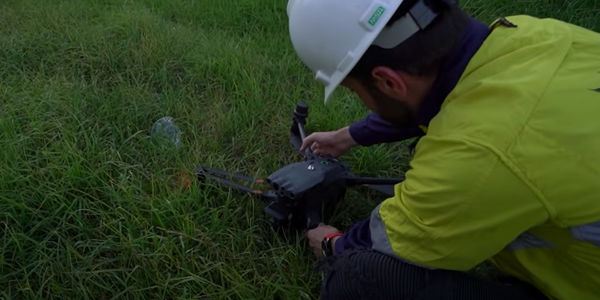 The legs on the M30 come off the body but visually looking at the M30, it does look like it does sit lower to the ground. Not having the legs, having the joint a lot lower to the ground, it does make it a bit harder taking off from some grassy areas or some uneven terrain. So definitely using a launch pad is required with the M30T.

M30T v M300 controller comparison. It’s kind of night and day really. Obviously the Pilot 2 App is a little bit different, but very similar to the Pilot app so even using the M300 you could go straight into the Pilot 2 App and be able to use it comfortably.

There are a lot more controls or buttons on the M30T and we think it takes away from having to tap the screen so you have more control with your thumbs. 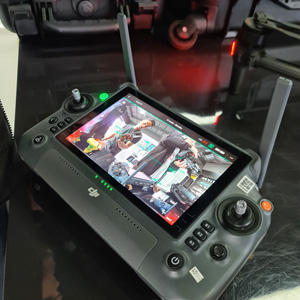 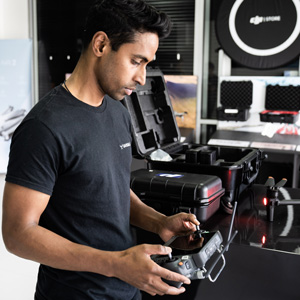 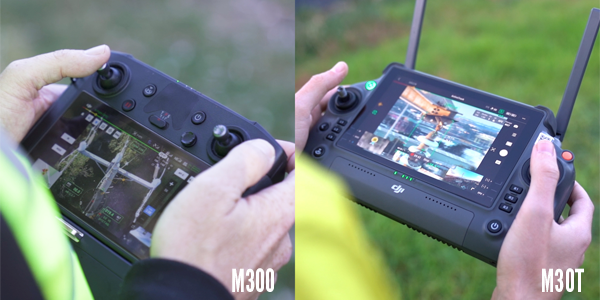 Zooming in with the M300. If you hold down the C3 button & dial the zoom is nice and smooth.. Whereas with the M30, the buttons on the controller zoom out five times or zoom in five times, so it just basically steps out. There is a wheel in the back also, even that does go to 2x times but it’s still a stepping zoom and not a smooth zoom.

We were really impressed with the FPV as well. We know it’s got low light capabilities now, but it was just so sharp and clear compared to what we’re usually used to in the FPV camera on these drones. The FPV camera also appears to be wider than the M300.

There’s also been talk that you can dual operate the M30. We don’t see why they wouldn’t do it. There is also talk about the flight hub 2, where you can live stream to other devices and mobile devices. 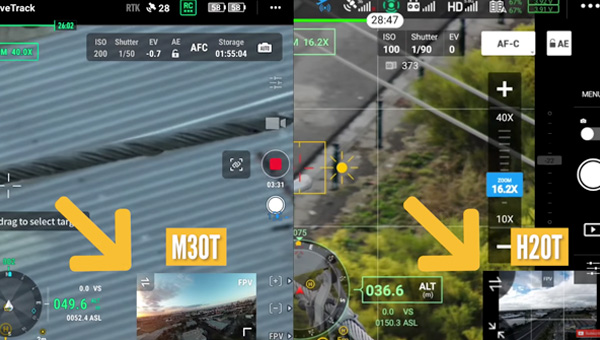 So final thoughts between the M30T and the M300. Now that we’ve had a chance to test both out on real-life operations, I think DJI has done really well with the M30T. There is a market for it definitely and especially the portability of being able to take it with you is a lot easier than carrying the M300 around.

We think they will sell more M30s than the M300 as the price point is more attractive but also so many more capabilities. The only benefit in having a M300 is adding different payloads such as Lidar or to top mount or triple mount it!

Looking to get into drone inspections, join our training academy: Drone Masterclass Academy